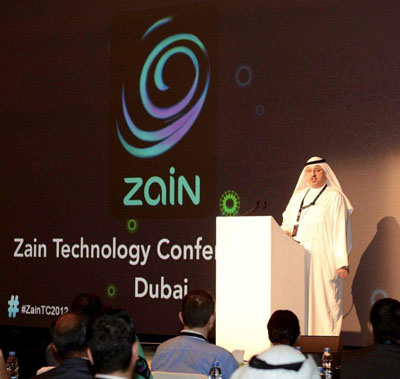 Zain Group held its Zain Technology Conference in early November 2012 for its suppliers in order to better align its technology investments for the future.

Last week, I travelled to Dubai in the United Arab Emirates with my colleague, Steve Loebrich, to attend and present at the Zain Technology Conference. That brought together senior technical staff from the Zain Group of mobile operator companies from eight countries across the Middle East and North Africa, including Bahrain, Jordan, Iraq, Kuwait, Lebanon, Saudi Arabia, South Sudan and Sudan. This was the second time this pioneering mobile operator has held this conference since 2009. Zain launched the first mobile network in the Middle East in 1983 and now serves more than 41 million subscribers.

At the conference, Zain announced its new initiative “Ghanduna Zain” (Zain Tomorrow), which is a new strategy to bridge its technology investment plans with the future. Like mobile operators all around the world Zain is working hard to support the booming demand for mobile broadband data as well as providing basic voice and data services, through high-speed 3G technology and now with the impending launch of LTE services in its Kuwait network.

In the words of Zain Group’s CTO, Hisham Allam, “The purpose of our conference is to facilitate the exchange of the latest industry expertise, and given we have vast areas of growth in the fields of voice and data services, such trends pose both an opportunity as well as a challenge in terms of managing the expansion in traffic efficiently.” Allam continued, “The rise in mobile data and the growth in the usage of smartphones to access content is a reality, with smartphones representing over 90 percent of all mobile devices sold in Kuwait at this point in time. The increasingly sophisticated nature of modern mobile-services consumers requires that we become fully aware of their needs and their expectations in terms of quality of services.”

During the conference, Zain’s vendor partners gave presentations on new technologies and highlighted their products and services. Aviat Networks participated along with our partner, Middle East Telecommunications Company (METCO), which has worked with Zain for the past 25 years in transmission and backhaul networks in countries such as Kuwait, Iraq and Sudan. During the breakout sessions, Aviat conducted two presentations covering Network Convergence and lowering the Total Cost of Ownership of microwave backhaul networks and an overview of technology options and challenges for providing backhaul for new Small Cells.

Overall, it was a great event and extremely well-organized by Zain, and I look forward to the next conference. You can view a short video of the conference on CNBC Arabia (in Arabic).