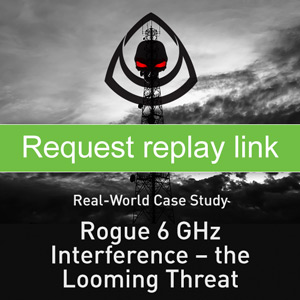 The introduction of Wi-Fi 6E and the push to utilize the 6 GHz spectrum for mobile 5G are presenting increasing interference risk to existing operators using fixed links in the 6 GHz FCC bands.

With the introduction of Wi-Fi 6E and the push to utilize the 6 GHz spectrum for mobile 5G, fixed links operating in the Lower and Upper 6 GHz FCC bands are under increasing threat from interference both from legitimate and rogue operators. The mobile industry is clearly targeting this spectrum for 5G services, seeing it as ‘under-utilized’ and observing that most mobile operators would prefer to reuse this spectrum more efficiently for mobile access and relocate their backhaul links to other frequencies. But where does this leave other operators dependent on 6 GHz for their critical wireless transport links?

In this article we look at one recent instance of interference from an unauthorized use of a point-to-multipoint (PTMP) radio system that was operating in the licensed L6 GHz spectrum that severely impacted the operation of a newly deployed 6 GHz point-to-point (PTP) microwave link, how this was discovered and what steps were taken to resolve it.

This rogue interference was entirely unexpected and was the first time Aviat had encountered such a situation over many decades of deploying radios across the US. The investigation and resolution took many months of intensive work, delaying the commissioning of the links and increasing the project costs significantly.

During the deployment of a number of new 6 GHz microwave links for a customer, a US County located in large metro area, Aviat encountered some very peculiar problems. The receiver threshold tests were failing badly, by between 2 and 25 dB, and measurements would vary over time, hour by hour, day by day. Measurements showed a huge threshold degradation, which resulted in a reduced fade margins down to 10 dB, instead of 35 dB as predicted by the link design.

Aviat considered all potential sources of the problem – licensed radio interference, building reflections, misaligned antennas, damaged waveguide, faulty equipment, etc. The radio equipment at each end of the link was even replaced with new radios operating on different frequencies, but the problem got even worse, and persisted for many months.

Some Brief Background on the 6 GHz band

In 2020, the FCC opened 1200 MHz of spectrum in the 6 GHz band (5.925–7.125 GHz) for unlicensed uses, including Wi-Fi 6E and other point-to-multipoint (PTMP) applications. Unlicensed devices will share this spectrum with incumbent licensed services under rules crafted to protect those licensed services and enable both unlicensed and licensed operations to coexist throughout the band. The FCC authorized indoor low-power operations over the full 1200 MHz and standard-power devices in 850 MHz in the 6 GHz band. An Automated Frequency Coordination system (AFC) will prevent standard power access points from operating where they could cause interference to incumbent services.

Although Wi-Fi 6E is not yet authorized for outdoor use, but experimental testing is now underway and bodies like the Wi-Fi Alliance are preparing for what they see as a huge opportunity, while vendors such as Cisco have announced their first outdoor Wi-Fi 6E ready access point.

Meanwhile, the FCCs AFC system is still in development, will give Wi-Fi 6E access points real time instructions on where and how they can operate within the 6 Ghz band (ie: frequency range and power levels), via a direct data link between the access point and the AFC system. AFC is intended to protect incumbent microwave by preventing overlapping frequency usage by Wi-Fi 6E operators, with microwave link operators being given priority.

There is also a small 75 MHz piece of spectrum called the ITS band, which is reserved for radio-based intelligent transportation systems, such as vehicle-to-vehicle and vehicle-to-infrastructure communications. The FCC is also preparing to open 45 MHz of this band to extend the unlicensed band, granting Special Temporary Authority (STA) to use this spectrum, typically for up to 60 days but can be extended for longer periods.

Tracking down the Interference

While Aviat was looking for the cause of the link problems, it was noticed that there was a PTMP access point installed on the same rooftop. Since these systems should not be using the L6 GHz spectrum it was not initially considered a potential source of interference. Checks with the operator of the PTMP system revealed that they in fact were operating in the ITS spectrum using an STA, but also illegally operating in the L6 GHz spectrum which was not allowed by the STA. As it turned out there were numerous other access points deployed in the city by this operator.

Using a spectrum analyzer Aviat was able to confirm that the PTMP AP were operating in L6 band with a frequency hopping 20 MHz channel and a wide beam-width antenna. The PTMP equipment was from a well-known vendor but was operating ‘beta’ software that caused it to operate well outside of the authorized spectrum range. This interference was incredibly hard to pinpoint due to the changing frequency of operation and power.

Aviat had established that the PTMP operator was unaware that they were illegally using the L6 GHz spectrum, and along with our customer contacted the local FCC office, who sent their own investigators to take measurements that confirmed Aviat’s findings. They then returned 4 weeks later to find that the PTMP system was still operating unchanged. In the meantime, Aviat found a second PTMP system that was operating in L6 GHz spectrum. The FCC is in the process of issuing formal warning letters to each operator to cease operation in the L6 band.

This case study demonstrates how a rogue PTMP system can have devastating impact on the operation of your 6 GHz links. Microwave radios do not have any countermeasures to mitigate this interference – features like ACM and ATPC do not help.

Aviat now looks for potential 6 GHz PTMP interference as part of the site/link survey, before the link is deployed, however this won’t always protect against PTMP interference at a later date. Additionally outdoor Wi-Fi 6E is coming, which could multiply these issues in practice, as the fear is that there could be many more instances of rogue deployments threatening the operation of your 6 GHz links.

Prevention is better than cure

Aviat has been aware of this threat, and as a result has developed our Frequency Assurance System, or FAS. FAS is specifically developed to monitor, assess and report on PTMP/Wi-Fi 6E interference. It is simple to implement on your existing links without updating hardware or software. FAS can be deployed as a premises or hosted solution, the latter in Aviat’s own Hosted Private Cloud service.

Wi-Fi 6E and PTMP interference is bursty and dynamic, so it is very hard to capture and quantify, but Aviat FAS will detect the interference and predict the likely impact on link operation, whether that be degraded operation or a complete outage. FAS uses onboard analytics to pick problems up, and then present the necessary data in a concise report format, as the FCC often may not have seen such cases before.

In addition to FAS, Aviat can also provide an Interference Diagnostic Service (IDS) to help you categorize, document and understand interference, and to determine how it can be resolved.

If you would like to learn more about 6 GHz interference or request a FAS demo, please contact your Aviat representative.